Ages ago, before written history, the realm was a vast void, in which the first of a powerful race of beings came into existence, who would later be known as the Ancients. Over the eons, the Ancients continued to emerge into the realm, roaming the lands and heavens to study and nurture the home that gave them life.

However, one the first of these beings, known as Dramar, became hostile toward his brothers and sisters. After losing a battle of will with one of them, he soon abandoned the realm to explore parts unknown. Though some believe he left of his own free will, defeated and disgraced, there are those who contend he was forcibly exiled from the realm for reasons known only to the Ancients.

In the eons that followed, life began to emerge and prosper in the realm. It was also during this time that most of the Ancients became bored with their daily tasks. They created ethereal gateways by which they could travel to other realms, and set off in search of new knowledge and adventure. Those that remained knew that they too might one day succumb to this wanderlust, and decided to create a race of magical guardians to protect the realm in their absence. From this was born the elder dragons.

Granimyre was the first of these elder dragons, and was perhaps the Ancients' greatest achievement -- a being constructed of powerful magic perfect melded in the form of flesh. As a nearly immortal being, he was charged with overseeing all of the dragons that came after him. The elder dragons that came after fanned out across the realm, each responsible for protecting a different domain. The elder dragons flourished, and soon gave birth to the first generations of mortal dragons.

Several millennia later, other intelligent races began to emerge in the world. Dissention began among the remaining Ancients and the dragons on how to treat these new arrivals. Bored with their own existence, yet unwilling to depart their home for other realms, these Ancients saw the newer races as toys for their own amusement. Many of the younger dragons shared this view, and delighted in disrupting and destroying their lives. Still other Ancients, along with most of the elder dragons, sought instead to enlighten and assist the development of the younger races, recognizing in them the vast potential these new beings possessed.

In the months leading up to what would be called the War of the Scaled Horde, Granimyre began to hear whispers of several younger dragons suddenly banding together and attacking elder dragons, taking the territory that the elder protected for their own personal hunting grounds. He also heard rumors of armies of monsters and dark races orchestrating coodinated attacks against settlements on the borders of their lands. He sensed some powerful, unseen force behind all of this, and in his mind, he saw visions of this army sweeping across the lands of Tarias, and destroying everything in their path.

He gathered together all the elder dragons and pledged an oath to protect the mortal races from their destructive kin, and the growing threat posed by the dark army. Since most of the younger dragons relished raiding mortals and their settlements, it meant that many former friends would grow to become bitter enemies, and the elder dragons would be forced to destroy their own children to uphold their oaths. This action only served to fan the flames of discontent, and a war between the dragons broke out only a few weeks later.

At first, the Ancients who supported one or more sides of the conflict refused to participate directly, preferring instead to watch and allow the dragons to fight amongst themselves. Granimyre was determined to end the conflict quickly, hoping to show the younger dragons, through force of will and brute strength, the folly of their actions. The elder dragons and many of the younger races rallied to Granimyre's side, and would come to be called the Guardians of Light. Against their united front came the maurading dragons, along with the army of evil races and humanoid creatures, which sought to plunder the land for their own purposes. This combined force would be come to be known as the Scaled Horde.

The younger dragons, far outmatched by the elder dragons, were defeated time and again in battle. Granimyre and the elder dragons made every effort not to kill any of the younger dragons, their goal being to end the conflicts with as little bloodshed as possible. The Ancients that secretly supported the Horde knew that if Granimyre's forces were successful, it could severly weaken their power over the younger races. They sought out a new ally, and found one in the form of an exiled god. 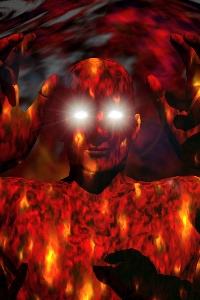 Dramar had been away from the realm since his departure, long before the rise of the mortals. Though it was evident he had become more powerful during his long absence, he kept the source of his newfound power a jealously guarded secret. He had spent his exile pursuing the means to wrest control of the world from his siblings, and had returned to Tarias with a master plan to achieve his goal.

With the aid of these Ancients to conceal his return to the realm, Dramar used his powers to grant dark boons to the Horde and the rebelling dragons in dozens of battles, leaving a path of destruction in their wake. The Guardians suddenly found themselves on the losing side of the war, and even the mighty Granimyre could do nothing to turn back the tide of battle. 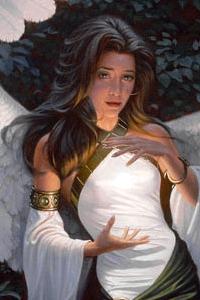 The remaining Ancients were still hesitant to take sides in the war. Though they desired an end to the conflict, many feared that such action would only lead to a repeat of a war from before the Age of Dragons. In that war, the first mortal races, wielding the untold power that the Ancients had granted them, wiped each other from the face of the realm, and nearly destroyed the realm with them.

But, there was one Ancient who could no longer stand idly by while the Horde continued their rampage. Her name was Jhuntara, the Goddess of Hope and Wisdom, a Moderate Power in the realm before the war. She feared that entire civilizations, and eventually all the mortal races, would be destroyed if the Ancients did not act to counter the unnaturally growing power of this Horde. She pleaded several times with the Council of Ancients to intervene. Still, they abstained, even as their mortal followers were killed in battle or fled the approching Horde. In defiance of the Council, she joined forces with Granimyre, determined to stop the Horde, and their hidden master, no matter the cost to herself.

That decision cost her dearly. By directly interfering in the affairs of the mortals, she had violated one of the Ancients' highest mandates. At first, the other Ancients merely shunned her, refusing even to acknowledge her existence and breaking ties with her church and followers. She was finally cast from the Ancients' spiritual planes entirely, exiled to the mortal plane in her avatar form. For any other Ancient, such a fate would severely weaken them, amking them little more than a powerful immortal or demi-God. However, to the elder dragons and mortal races, she was a beacon of light and source of inspiration, and they flocked to her cause in record numbers. The combined wills of these followers, and their unyielding devotion to her, gave her power nearly rivalling that of the Greater Powers among the Ancients, even as she remained trapped in her Avatar form.

With Granimyre and his forces under her protection, the Guardians began turning back the onslaught of the Overlords with increasing success. But the final price for her interference would all too soon be realized. Because of her actions, Jhantara had drawn the spite of the Ancients who were secretly aiding Dramar and the Horde. Although those Ancients had sufficient reason to fear the combined power of Granimyre and Jhuntara, and thus dared not openly challenge her, Dramar defiantly fumed over his defeat, and drafted a scheme by which he could be rid of her forever.

In a surprise move, he withdrew his armies and revealed himself to the Council of the Ancients. He courted them to serve as arbiters of a meeting between him and Jhuntara, to discuss an end to hostilities. Cautiously, Jhuntara agreed, and the Council arranged for her to return to the spiritual realm for the duration of the talks only. She left Granimyre and his army to rest while she appeared before the Council.

Dramar's call for peace was merely a diversion. His allies among the Ancients had until now use their powers to help him separately, but they all came together this one time for the sole purpose of destroying Granimyre and Jhuntara in one grand stroke. Dramar had harvested a devastating new power during his long exile, and convinced his allies to combine their powers and use it against Granimyre, while Dramar kept Jhuntara and the Council distracted. What he failed to mention to them, however, was the true nature of this ritual, and what affect it would have on them.

As Granimyre and his army rested, the Horde army attacked. With their minions occupying the attention of the Guardian army, the Ancients focused their combined energies together and began channelling it into the ritual against Granimyre. The first surge of negative energy struck him, and his entire body convulsed with pain. With such raw power focused against him, even the mighty Granimyre could not withstand the onslaught for long. He cried out to Jhuntara in horrified agony as the Ancients prepared to unleash another surge of energy against him. She came to him instantly, and found his life being drained by a strange, seething mass of chaotic and negative energy, the likes of which she had never before seen. Focusing her own power into him, she succeeded in purging the darkness devouring his life.

He opened his eyes and smiled wearily at her, but his smile turned to a look of horror as another surge of dark energy streaked toward her from behind, unerring and unstoppable...

"The Gift"   ►
All content on this site is Copyright 2000-2013 by Stephen Nispel or its respective authors.
Content is for personal use only, unless otherwise granted by the original authors.