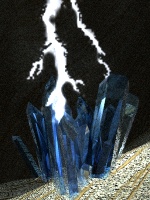 Storm crystals are rare crystals often found in small cluster formations in the high-elevation mountain regions of Tarias. They are usually clear and prismatic, with a slight blue tinting often resembling that of the rare blue diamond. However, unlike the diamond, these stones have a useful and potentially deadly property.

Cultivating such natural wonders is a dangerous, but rewarding enterprise. The amount of electrical energy stored in a crystal no larger than a man's finger is enough to kill him, should it suddenly discharge. In addition, the smallest spark can set off a fully-charged crystal. However, when successfully cultivated and employed with the use of magic, storm crystals can create a potent weapon or energy source. As such, they are often found in magical staffs, wands, and powerful spells.

Because their energy capacity varies from one crystal to another, based in part on size and amount of imperfections in the crystal, the power and value of storm crystals are based on the number of "charges" they can hold. Devices which employ these crystals can use these charges to perform specific functions, deal damage, etc. Either way, the function or damage is always electrical in nature.

The typical value of a raw storm crystal varies widely. The value of a storm crystal is equal to 100gp x the square of the crystal's max capacity. Thus, a crystal with a capacity of 5 charges would be worth 2500gp (100gp x 5 x 5).

In terms of damage, an unmodified storm crystal that discharges 1 charge can deal 1d6 points of electrical damage to everything in a 5' radius, or in a straight line up to 15' away. A crystal that discharges 2 charges can deal 2d6 points to all targets up to 10' away, or in a single line up to 30'away, and so on. When discharging naturally, they can discharge any number of charges at once, up to the number of charges currently stored. All creatures and objects affected are entitled to the appropriate saving throws for half damage.

Magical devices, such as wands and staffs, can dramatically increase the range, area, or damage of the discharge by controlling and focusing the release of energy for a specific purpose.

Storm crystals naturally recharge over time (1 charge per day), but they will also absorb a portion of any electrical energy they come in contact with. This is part of what makes them so valuable, and so dangerous.