Original Artwork - Shadows in the Woods
by Stephen Nispel 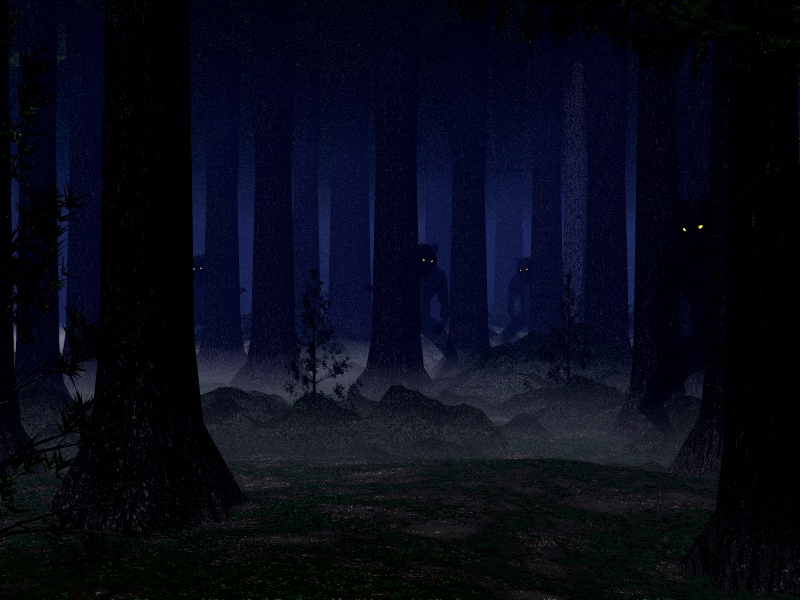 This image was inspired by a recent D&D adventure my fellow players and I went through, called "Invasion of the Shadow Lord". In the party's search to uncover the source of recent series of murders in the Umar Hills, they ventured into an expanse of woods cloaked in an unnatural darkness. After having met heavy resistance near the den of a corrupted pack of wolves, they found the going a bit too easy...

To quote one of the characters when they realized they were being surrounded: "Guys, I think we're in trouble..."

To make this scene, I used the same forest-making techniques as in the image "Raven's Thunder", but changed many of the tree locations and added a bit more variance to each trunk's width. I then took some monster models and gave them a black, partially-transparent texture, and added glowing yellow eyes in the eye sockets to get a close match to the descriptions of the shadow creatures in the adventure. This is also a "daytime" scene, but with the sunlight intensity halved (just as described in the adventure text). I then added a little fog and some haze to get a scene which (I think) captures elements of both day and night.