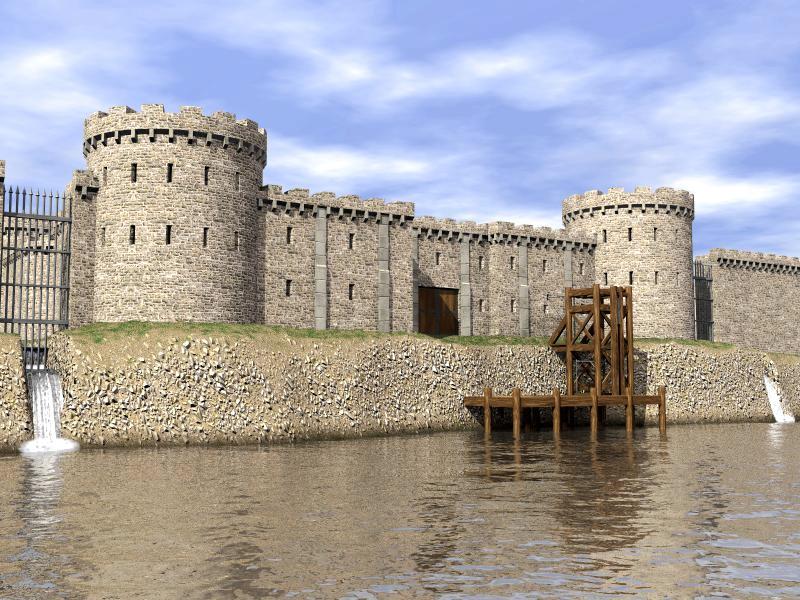 This is the river view of Riverford Keep, the home of the main characters (played by my friends) in my previous D&D campaign. This view is my third (and hopefully final) draft of the keep's rear wall and docks as seen from the river Tesh. Since part of the compound's outer wall is also the rear wall of the central keep, the keep's wall is extra thick compared to all the its other walls. The towers feature arrow slits every 22.5 degrees around their center, allowing archers and crossbowmen to easily blanket the ground and river below with missile fire.

The moat which surrounds the keep empties into the river on either side of the keep by means of floodgates, located at the rear walls, which regulate the water level of the moat. Security was a concern here, as well. Normally, all that would be required for the moat to empty would be a small archway cut into the outer wall. However, an enemy could then theoretically travel atop the wall to traverse the moat. To prevent this, the section of wall that would span the moat is deliberately missing, with a solid iron spiked fence in its place.

Along the river bank, you can see the docks area. Built into the docks is a freight tower used to carry goods up the 20-foot embankment to the rear doors of the keep. It is a 2-chain design, with one that connects to the winch, and another that goes to the counterweight located on the side of the lift tower. For added security against a river raid, the winch is operated from inside the keep.

This scene was done entirely in Bryce 7. Other than gamma and contrast adjustments, there has been no post-render editing to the image.