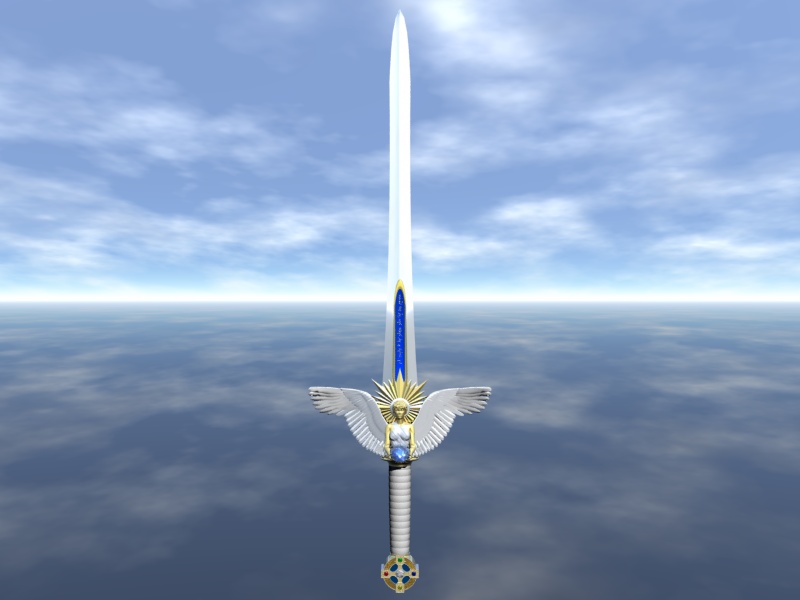 This is the holy sword named "Eternity", quite possibly the most powerful weapon in the realm designed to combat the forces of evil. It was created when the Goddess Jhuntara infused her essense into the holy sword of her champion, a paladin named Ronan.

This image is still a work in progress, as I intend to add a faded collage in the background behind the sword. My goal is to fill in the "empty" areas of the image, without taking the main focus of the image away from the sword.

The deceptively simple design of this sword took me weeks to create. For the guard, I started by finding the right pose for the figurine that was to become the angel at the center of the design. Next I added wings to the figurine, and again had to find the right pose for the wings that looked "natural", yet conformed to the general outline for a sword's guard. I next added in the golden sunburst pattern around the angel. Finally I added the blue gemstone to the design, sizing and positioning it so it was properly cradled between the figurine's arms and the torso. Once I had the design the way I wanted, I duplicated it then flipped it to form the other side of the sword's guard.

Last was the pommel (hilt) of the sword, which has a celtic cross design to it. Though it is hard to see from this image, the design is multi-layered. The thick ring around the design was created with a ridged "starburst" pattern inside of it. Each of the four "points" of the cross contain an intricate celtic knot pattern I created, with final touches including the large diamond in the center, and placing a smaller gem at each of the "points" of the cross (which are meant to be ruby, sapphire, emerald, and garnet).