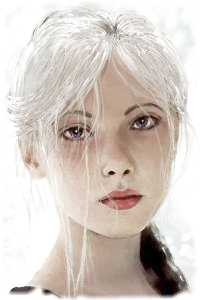 Shalindria has little recollection of her Celestial mother, only that her human father raised her alone for many years after her mother disappeared. All she really knows is what her father wuuld sometimes tell her. He would say how much joy she brought to her mother, and how happy they were as a family. But, in the months before her disappearance, he would often find her staring off in the distance, with an almost sad expression.

For the longest time, he believed she had started to feel the pull of her home plane, and finally left when the longing became too great to bear. This was a common fate for Celestials who spent a long time away from their home planes.

Hoeveer, around the time Shalindria was 8 years old, she began to experience her first visions, and not all of them were pleasant, especially those concerning her mother. Nightmarish scenes played out in her mind's eye, and in the wake of each vision, a burst of wind would blow through the room, or small objects would fly across the room from where they sat.

Desperate to find his lost love, and concerned about the visions plaguing his daughter, he sought out the local priesthood of Selune for help. They agreed to take her in, and teach her to better understand and control her visions and powers before they overwhelmed her. Her father, meanwhile, struck out on a new quest to find her mother, armed with what little new information his daughter's visions had managed to reveal.

It has been 10 years since then, and her father has yet to return after all this time. Now, Shalindria is preparing to set out on a quest of her own. A quest to find out where her powers come from, to find out what really happened to her mother, and to find find a way to stop her most terrifying vision from coming true...