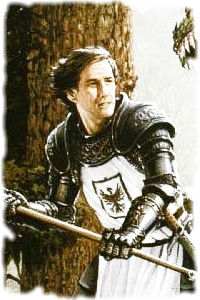 During the War of the Scaled Horde, a young knight-in-training named Ronan rose in rank and reputation among the embattled Guardian armies. Possessed of great skill and power, he became known for his keen tactical mind, as well as for his reverence to the religious teachings of the goddess Jhuntara.

That reverance turned to complete devotion on the day of Jhuntara's death. As the armies of the Guardians and the Scaled Horde battled, the anguished roar of a mighty dragon tore across the sky, and the fighting stopped momentarily as Granimyre fell from the sky and crashed into the battlefield. Ronan bore witness to Jhuntara's demise only moments later as she tended to the injured elder dragon. As Jhuntara vanished, locked in a fatal battle with the dark entity that had assailed Granimyre, the Horde resumed their assault. Ronan charged headlong into the fray, and though the battle would be lost, Ronan's valor shined. While the rest of the Guardian army was forced to retreat, he remained behind long enough to rescue his injured unit commander from the battlefield, an act which nearly cost him his own life.

He was officially granted his Paladinhood later that same month, and dedicated his service in Jhuntara's name. He had been so moved by her sacrifice that he set out on a personal quest to find her sanctuary. He spent months searching for it, guided only by fragments of legend and his own steadfast determination. When he finally reached the sanctuary 6 months later, he knelt reverently before the crystal blue water and vowed on that day to forever preerve her memory and champion her cause. As long as he lived, he would ensure that the people of Tarias would never forget the sacrifice she made, or the hope she had inspired within him.