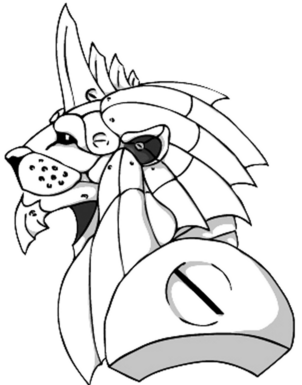 Pulsarvadon is the middle child of five. As a cub, he was the most playful of his siblings, and the first to outgrow that phase of childhood. He was agitated by his siblings' excessive playfulness, which he no longer found amusing. His dislike for their immaturity taught him to keep most of his thoughts to himself. His parents saw him as the odd one of children; he was quiet, didn't speak unless spoken to first, and was very solemn in his words and actions. He was also the first to leave home and seek his calling in life.

He found his niche in nature among the wildlife. He trained to become a skilled hunter, and traded furs from his kills to earn a living. He prefered living outside the hustle and bustle of the city, and only went there to sell at the market. He enjoyed his life of solitude and independence, and had only a handful of those he called friend.

Then one day, he received a message from his sister that their parents had died under mysterious circumstances. There were no leads to follow, and after almost a year of searching blindly for answers, he went home and decided it was best to get on with his life. He no longer keeps in touch with his siblings, and hopes that he can solve the enigma hehind his parents' deaths.