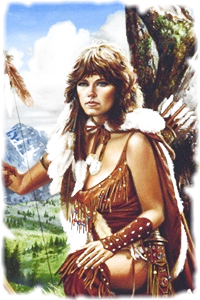 Nataya is a rare blend of athletic beauty and uncanny instinct. She is often unpredictable, temperamental, and very independent. She has the chestnut hair, hazel eyes, and impressive stature of her human father, combined with the sculpted features and wild temperament of her elven mother. She is a naturally skilled outdoorswoman, and a force of nature to be contended with.

She is quiet, moody, and is slow to trust anyone. Though many mistake her behavior as the result of years living in the wild, those who know her best have learned the truth is far more sobering. She was taken from her family 12 years ago, when a Zhent force descended on her village after refusing to pay taxes to the Zhent lords occupying the territory. Most of the village men were slaughtered in the battle, and the survivors were captured and sold into slavery. Nataya�s master was especially cruel, and she still bears both physical and emotional scars from her ordeal.

She escaped about 4 years later, when she managed to turn the tables on her captor during a "discipline" session, and fled into the wilderness. Even after all these years, the marks from the repeated beatings she received are still clearly visible on her back and shoulders. Only she knows the extent of the other scars left over from her ordeal.

She now harbors an intense hatred of the Zhentarim and the Zhentilar, and anyone found to be in league with either of these related organizations quickly find themselves at the end of her sword.

Though she is a fighter at heart, she owes her spiritual training to an old hermit who lived in the woods near Elventree. He originally tried to teach her the ways of the druids, but her spirit proved too wild to maintain the discipline and detachment required. Her love of the outdoors made her a natural as a Ranger, however, and she soon joined the order of the Sylvan Blades, and finished her spiritual training in service to the goddess Mielikki.