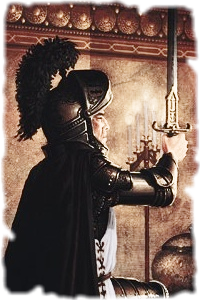 Realm of Origin: Toril (Forgotten Realms)
Era: Present (After the Time of Troubles)

Currently serving as the Captain-of-the-Guard for the nobleman Garamek, Mortok represents a rare combination of skill and humility. He is brave, strong, and loyal. A skilled fighter, he has a wide range of weapons to choose from, but can use almost anything as a weapon when the situation dictates.

To look at him is to look at a human tower. Standing at 6' 5" with over 200 pounds of lean muscle covering his frame, one can easily imagine battles won without him ever having to land a single blow; anything smaller than an elf would most likely stop dead in its tracks at the mere sight of him.

Despite his looming presence, he is open and friendly, even if a little somber. He is a mentor to many, and his dedication to the noble he serves is unquestionable. He is ruggedly handsome and kind, and many women consider him quite the catch. To their dismay, however, Mortok still has not gotten over the death of his wife, and has no wish to remarry.

He has no real wealth. He is modestly payed each month by his noble, and teaches combat skills to willing students for free in his spare time. Despite this, or maybe because of this, he has gained a reputation for turning out some of the finest warriors in the land.

There was a time when he was a Paladin, but he lost his status and powers over 20 years ago, when he accidentally killed an innocent during a fit of rage. It was a mistake, to be sure; a mistake that anyone could have made in the same situation. Normally, an act of repentance and a difficult quest might have restored his Paladin status. But these he has already accomplished many times over. The problem lies within himself. He has never forgiven himself, and cannot achieve this until he faces the guilt that haunts him to this day.

Mortok was one of the most distinguished Paladin Knights in his homeland of Cormyr, loyally serving a kind noble and aiding the people of the local towns and villages wherever possible. His greatest joy, however, was Regyna, a beautiful young healer he met some 20 years ago and instantly fell in love with. They were married that spring, and lived in wedded bliss for about a year, when tragedy shattered their world.

As the chronicles tell it, Regyna, then a few months pregnant, set out one day with several others from the noble's estate to attend a spring festival held at one of the local villages. Mortok was unable to attend, as he and his men were assigned to track down raiders in the nearby territories. The village was ransacked later that day by one of the bands of raiders, leaving behind dead, wounded, and raging fires in their wake.

Upon hearing the news, Mortok charged on his horse toward the village, desperately hoping to find his love unharmed. When he found her, she was lying in a pool of blood, her life slowly draining away. Mortok tried everything he could to save her, but she was beyond all help. When she died moments later in his arms, he unleashed a scream heard for miles across the nighttime countryside.

In the course of the battle that followed, Mortok's foe urged him on, using Mortok's anger to keep the towering paladin from fighting with a clear head. Mortok's fury reached the boiling point when his unidentified opponent boasted of having raped one of the village women during the raid. The description he gave matched Regyna exactly, and Mortok charged at him in blind rage. The ringleader ducked into an alley, and Mortok quickly followed, swinging his blade madly about. Out of the corner of his eye, Mortok spotted movement, and charged the moving shadow, striking home with all his strength.

As his eyes slowly adjusted to the darkness of the alley, they filled with sudden horror. The dead figure before him was not the evil ringleader he had just been fighting, but was instead a 12-year-old town boy...an innocent child. The boy had been hiding in the alley trying to avoid the raging battle in the street. Mortok fell to his knees, and his rage drained away into grief.

As he knelt there, Mortok silently wished for the ringleader to come out of the shadows and slay him where he knelt. As fate would have it, however, the ringleader had slipped into the night, unwilling to fight a battle he believed he could not win. Instead, Mortok went on with his life, with a heavy heart and without the powers of the Paladin he had once been. Though he still loyally serves his noble to this day, he has never been -- and may never be -- able to forgive himself for that one tragic mistake. Until he does, his soul will never have peace, and he may never regain the powers he lost so long ago...