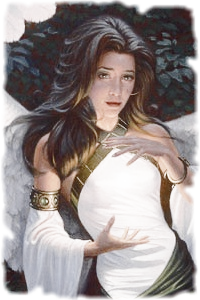 Realm of Origin: Tarias (the Ancients Crossroads)
Era: Emergence of the Ancients - The War of the Scaled Horde

In the time before the War of the Scaled Horde, Jhuntara served as a symbol of all that was good and just in the realm. She used her powers to benefit mortals, encouraging them to achieve a better understanding of themselves and their home. She was loved by all with good hearts and honest intentions, and despised by those whose hearts were darkened with obsession and greed.

During the war, when the exiled god Dramar returned and united the dark armies behind him, Jhuntara was the only one willing to step up and defend the mortals from the onslaught of Dramar's minions. By this act, she violated the Ancients' mandates against interference in mortal affairs, and was exiled to the mortal realm as punishment. She was left to fight against Dramar and his kind with only the elder dragons and the mortal races at her side.

To the mortals she defended, she was not just the Goddess of Wisdom, but became also the embodiment of Hope. Unfortunately, that hope was shattered on the day she fell at the hands of Dramar's dark allies. The other Ancients were suddenly forced to take notice of what was truly happening to their realm, and a few began doubting the prudence of their own mandates.

Though many thought her dead, she managed to survive the ordeal at the cost of most of her powers. But it was the devotion of a young paladin which ultimately gave her the means to rise up yet again to defend the mortals she cherished so much. The old chronicles tell of how she infused the paladin's sword with her own lifeforce, thus creating a magnificent weapon with the potential to turn away the darkest foe.

Ultimately, the other Ancients came to understand the wisdom behind her actions. For the first time in mortal history, they broke with their old mandates, and confronted Dramar in a showdown which changed the realm forever.

To this day, she is still remembered by the people of Tarias. Paintings, poems, and songs devoted to her abound throughout the land. Though she is gone, many still worship her, and receive their guidance through other Ancients who act on her behalf.

Her spirit does live on, if only in the hearts of the people. So long as there is hope in the world, her spirit will never die.

"Beyond"
©1996
by Chris Tilton
All content on this site is Copyright 2000-2013 by Stephen Nispel or its respective authors.
Content is for personal use only, unless otherwise granted by the original authors.