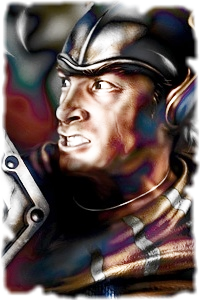 At the tender age of 6, he was found wandering the wilderness by a traveling merchant caravan on its way from Cormyr to the Sword Coast. He had no memory of his past or his name, only that something terrible had happened. One of the merchants took him in after attempts to find his parents failed. Having no children of their own, the merchant and his wife adopted him.

During his teenage years, he fell in with a bad crowd, and ran away from home during a fit of rebellion. He lived off the street for several months, learning the art of thievery in order to scrape out a meager living, and where he learned how to fight. With his strong and nimble body frame, he was an ideal candidate to become a prize fighter in various combat sports. The contests were often bloody, but not meant to be to the death. However, that was no guarantee, and accidents happened all too often.

He made friends with some of the regulars at the contests, and earned the nickname "Ironhorse" from his peers in reference to his incredible stamina in the contests. However, when one of his closest friends was brutally killed and dismembered by a crazed combatant in one of the contests, it proved a sobering experience for him.

After leaving the contests for good, he hired himself out as a mercenary, mostly serving as a guard for merchant caravans or hunting down local menaces such as bandits, orcs, and such. He threw himself into his work, travelling from one place to the next, always trying to forget his past.

Though he has never mentioned this to any of his closest friends, Ironhorse has been haunted by a recurring nightmare of a dark figure who invaded his home one night and burnt it to the ground. The nightmare is always the same, starting with a familiar female voice in the dark and someone waking him from his bed. He is swiftly carried from his room and out into the hallway, where sounds of a sword battle can be heard downstairs.

As he is carried out of the house, he can see through its windows a fire quickly spreading through the first floor of the house. His mother frantically runs toward the woods on the border of the property with him in her arms, enabling him to see the fiery scene behind them.

A dark figure steps out the doorway of the house, all in black and silouetted against the flames inside the house. From this distance, all he can see of the figure are two red eyes piercing out from under its hooded robe.

His mother runs hurredly through the woods for a good five minutes, glancing behind her every few seconds as if sure something was chasing them. She stumbles upon a large hollow log, and places him inside. She hurredly instructs him to stay hidden in the log until she returns for him, and begins covering the hole with dried leaves and fallen branches.

After she ran off, he waits for what seems an eternity, straining at first to listen for her return. The woods go suddenly silent, and he can hear what seems like a strong breeze briefly blow through the area just outside the log. The air becomes colder, and through the concealment of branches and leaves, he can make out a dark outline go slowly by, sending a different kind of chill up his spine.

The sound of a snapping branch echoes from off in the distance, and the dark figure suddenly takes off with unnatural speed in the direction of the sound. A minute later, a scream pierces the darkness, and the wood falls silent once again.

He resists the urge to scream out, as his mind tries to deny what his heart already knows. He lies there crying for over an hour, until exhaustion finally creeps up on him. He spends the rest of the night asleep in the log, waiting for a mother who would never return...