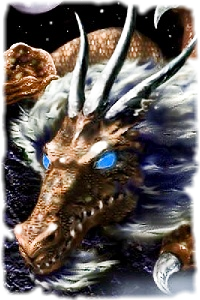 Excerpt from "The Oath"

Peridyne entered the colossal cavern that served as Granimyre's personal chamber. All along the walls were piles of oversized books and scrolls, the sum of knowledge that Granimyre had written down over the centuries. In the center of the chamber sat Granimyre, deep in thought with a troubled expression on his face.

"Pardon me, Master Granimyre, but the other elders have arrived."

A few seconds went by, and when Peridyne did not receive a response, he tried again. Granimyre acknowledged him then, but did not speak for another minute. "I am troubled, young one."

"I'm afraid so." Raising his gaze to meet Peridyne's inquisitive look, he lamented, "I fear that once we embark down the path we have chosen, the other elders and I may be forced to declare war on our own children. Even though we don't wish to do serious harm to them, we may be given no other choice."

"You aren't reconsidering, are you?" The concern in Peridyne's voice was evident.

Granimyre quickly turned his attention back to his apprentice, shaking off a lingering doubt. "No. If we were to let the slaughter of the mortals to continue without interference, we would be guilty of a crime greater than that of the marauders. I just wish there were another way."

In typical adolescent fashion, Peridyne countered, "If there was a way we could reason with them..."

Shaking his head, Granimyre interrupted, "I've already tried, and to no effect. They are determined to pursue their own agendas, without regard for anyone but themselves. My only hope is that through action, we will be able to stop their behavior before they cause further damage to the balance of this world."

Peridyne noticed that his master seemed in slightly better spirits now, and this brought him a little relief. Peridyne was an excellent student, but he found he still lacked understanding of just how much of a burden his master carried with him, especially the reasons why he continued to to show such concern with a world that barely acknowledge his existance anymore. He didn't want to sour his teacher's mood again, but there was one other unanswered question still bothering him.

As Peridyne headed out of chamber, the question rose suddenly to the surface in his mind. He turned and asked, "Master, the creatures the mortals fight..."

Granimyre did not speak, but waited for his student to finish.

A little slower this time, Peridyne continued, "You had mentioned yesterday that you plan do do more than just put a stop to the warring dragon clans; you intend to step in to help the mortals defeat the creatures of the Monstrous Horde. Wouldn't it be wrong to interfere in the mortals' battles, since those creatures are their natural enemies?"

Granimyre nodded slightly, but offered, "If it were that simple, I would agree with you. However, the horde marching against the mortal races is not what it seems. They are too organized. Too powerful. Creatures that normally fight each other are now working together. Something is guiding them, unifying them into a force of destruction not seen in many millenia. I have seen such behavior only once before. The events of that time resulted in the annihilation of entire civililations, and threatened to destroy the entirety of this realm."

No, there is something else at work here, something hidden beyond the realm of mortals; a shadowy veil even my sight cannot penetrate."

"But the only ones capable of such a feat ... does this mean one of the Ancients could be behind this?"

Granimyre smiled briefly at his student's keen insight, but then his expression turned serious once more. "It would indeed seem to be the case, but for an Ancient to once again risk the destruction of this realm, would require a madness beyond their ken. While I cannot prove it, I also cannot dismiss it."

Our purpose will merely be to even the odds, so to speak. If we choose not to help the mortals, the horde will continue to overpower them, and run rampant through the lands. Such events could upset the balance of power in this realm, and the realms beyond. We cannot allow this to happen under any circumstances."

"So, we will fight." Peridyne finished.

"Yes, we will fight." Granimyre turned his head toward the doorway, the faint sound of leathery wings filtering through the cavern hallways. "The others are waiting. Go now and gather them in the main chamber."

As Peridyne left the room, Granimyre drew himself upright, and bolstered his resolve before proceeding out to the main chamber. He pushed the last doubt from his mind, and announced to himself, "It is time..."