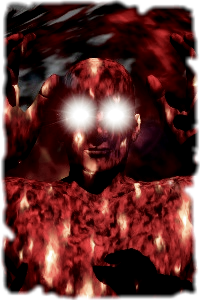 Realm of Origin: Tarias (The Ancients Crossroads)
Era: Emergence of the Ancients, The War of the Scaled Horde

Dramar is a wild and hateful god, worshipped by only the most vile individuals. He hates all living things in the world, and anything directly associated with the goddesses Tatyana and Jhuntara. His ultimate goal is to destroy everything that the Ancients and their allies have created, thereby gaining total dominion over the vast energies which flow deep within the world's interior.

Long before the first mortals appeared in the world, Dramar was the original ruler of the land, and he reveled in the power of the fires deep within the world. He was eventually confronted by Tatyana, and lost his power over the land after a long battle of power and will. Shortly thereafter, he abandoned the realm, though whether he left by choice or by force is cloaked in controversy.

He returned to the realm eons later, and for the long years known as the War of the Scaled Horde, he brought terror and destruction upon the realm. He was eventually defeated by the combined might of the other Ancients, but not before he had managed to wipe out several entire civilizations. For his crimes against the realm, he was imprisoned in an artificially created plane specifically designed for this sole purpose, though the identity or nature of his jailor remains a mystery. To this day, he rages against the ethereal walls that now bind him, a rage which manifests itself on our world every time the earth shakes or a volcano rains down its fiery death upon the land.