Guardian of the Ethereal Temple of Jhuntara 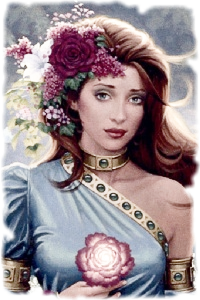 With hair the color of copper flame, and eyes as clear and blue as a mountain lake, All about her is an aura that speaks of tranquility and understanding. She is a wonderous vision to behold, but under her graceful exterior beats a heart at once both wild and caring.

Auriana is the only child of Koric, the captain-of-the-guard for the city of Tymor Keep. Her grandfather is Baron Tymor, founder and ruler of the city which bears his name. Having lost her mother at the tender age of 7, she grew up under the supervision of her father and his sister, Sele. Hers was a life of comfort and order, yet she never lost sight of the plight of the less fortunate around her.

Her life was changed forever at the age of 12. One terrible night, the city was attacked by an army of Drow, and a hired assassin was sent to kidnap her, planning to use her as bait in a plot against her grandfather. During the attempt, her father charged the kidnapper, and was severely injured in the struggle that followed. Before the kidnapper could deal the fatal blow, however, he was shot across the room by a sudden magical outburst from Auriana.

It was soon discovered that she had within her a natural magical ability, which had been dormant up until that night. Soon after the discovery, she was sought by many prominent wizards to be their apprentice. Instead, she found herself drawn to more spiritual pursuits, which led her to the priesthood. She spent the next several years learning to control and refine her newfound powers.

Many years later, she met and fell in love with a young Paladin named Ronan. Soon thereafter, Auriana's destiny would be revealed. On the day the goddess Jhuntara annointed Ronan as her champion, and created the sword "Eternity", she channeled her power through Auriana. The experience left Auriana with a new gift - the goddess had awakened within her the last of her dormant powers.

At first, Auriana believed she had simply gained a small portion of the goddess' power, a leftover of her brief experience as Jhuntara's vessel. But, as the weeks went by, she began to realize that it as more than that. She was changing, becoming something more than she could have imagined. By the time the war had ended, her transformation was complete. She had become an immortal...

In the years that followed, she would ascend in power to the status of demigod, and gained the respect and trust of the Ancients who resided in the newly formed Realm of Light. She now serves as the guardian of the Ethereal Temple of Jhuntara, a sacred place within the Realm of Light that serves both as a memorial to the lost goddess, and as the new source from which all hope and wisdom in the mortal realm flows.