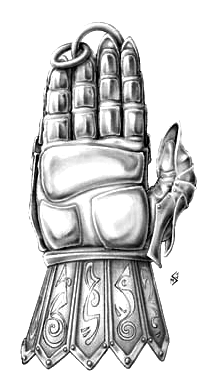 Argis is the adopted son of Mortok, and serves along with his father on the estate of Lord Garamek. Argis has lived most of his life on this estate, located a few day's journey southwest of Shadowdale. Like his adopted father, Argis is trained in the art of combat, but his strong desire to help the less fortunate guides his studies in the healing arts, as well.

Under his father's watchful eye, Argis has learned the value of duty and honor. But Argis has a bit of an adventurous streak, and has gone on several "outtings" in the past whenever the opportunity arose. Now in his 20th year, he has earned much experience, but little fame and wealth. He is now ready to strike out on his own, both to do some good and to earn himself a little retirement plan of sorts.

When first met, he can be rather shy, quiet, and thoughtful. Before long, however, he becomes more easy-going, and shows his emotions a little more easily. He is somewhat tall, with dark brown hair and hazel eyes. His average-looking frame and modest clothing is deceptive, however. His years of training have resulted in a compact, finely-tuned muscular build with enormous reserves of strength and power.

In battle, he is a powerful ally, and a formidable foe. He prefers heavy, end-loaded weapons with which he can use to pummel his opponents, or send them flying with a well-placed uppercut swing. Unfortunately, his fighting style usually leaves captured pieces of armor unusable until a smith can repair them.

If he has one major failing, it is his sense of balance. One minute, he can easily traverse a pit-filled room, then a moment later fall off a simple chair as he tries to sit down to rest. His hit-or-miss footwork has often resulted in humorous, and somewhat painful, situations in the past.

Many years past, raiders from the east began plaguing the territories of the Dalelands. Argis's village had thus far been spared, but fortune took a turn for the worse when the village lookout spotted raiders coming over the nearest rise. They came fast and hard, giving the village men little time to prepare for defense.

The battles were brutal, and those the raiders didn't kill outright, they corraled into the local church, and burned the building to the ground. Argis' father was among the last to fall, protecting his wife and son with the ferocity of a grizzly. When his father finally fell, Argis' mother shielded him from the blows that followed.

An hour after the raiders had sacced the village, Mortok and his troops charged into town. He sent most of his group to continue persuing the raiders, while he and the rest scoured the village for survivors. The soft wimpers of a child drew his attention to the body of a young woman. For reasons he could not understand, she reminded him of the wife he had lost in a similar raid, and his heart felt sorrow for the young boy huddled next to his mother's still body.

Mortok took the boy in and raised him as his own, naming him Argis. Argis trained primarily to be a fighter like his adopted father, but also learned the ways of the clerics. He wanted not only the ability to fight off evil, but also heal those who had been victims, like himself. Even today, fragments of memories from that horrible day sometimes intrude upon his dreams.

Once he was old enough, Argis joined the elite troops of the nobleman Garamek, and participated in a few adventures in the surrounding territories. Now 20 years old, Argis' thirst for adventure has become so strong, that even the powerful influence of his father can no longer keep him within the comparative safety of the lands around Garamek's estate...